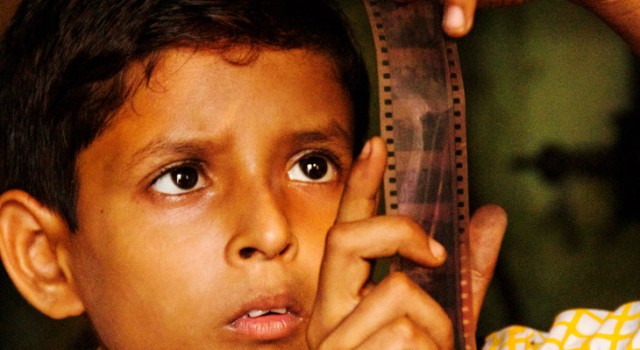 Friday 1. November, 22:15 h
at the same time as Beyond Bollywood

A few years ago, in the backroom of a cinema in a small harbor town in Bangladesh, seven-year-old Rakib found a huge toy: an old 35mm film projector.

Step by step, Rakib learned how to operate the machine twice his size. Three years later, what had started out as a playful and exciting game had turned into a regular job. Now, at the age of ten, Rakib works as a projectionist providing much-needed support to his family.
In his documentary The Projectionist, filmmaker Shaheen Dill-Riaz follows Rakib as he spends his days between home, school and the cinema. What emerges is the intimate portrait of a young boy living a tough life as the family’s only breadwinner. Dill-Riaz poignantly captures the conflicts between Rakib, his parents and his siblings. However, the strongest scenes in The Projectionist are the moments which show that despite all hardship Rakib still manages to keep his childlike nature intact.