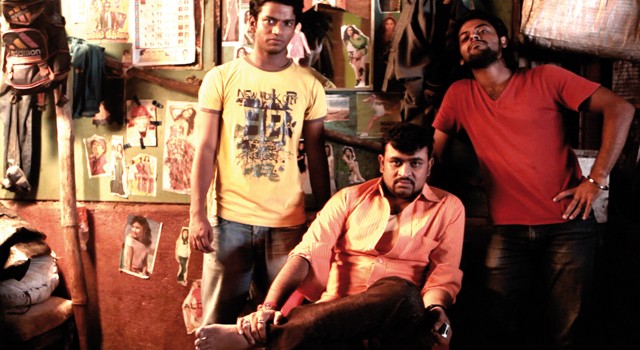 Director Onir who presented his film “I Am” at our festival in 2011, suggested five young filmmakers, whose short films we now show as exclusive German premieres. Thank you Onir! The films are characterized by their strong narrative and high quality. We will also show “Item number” by ex Frankfurt artist and filmmaker Oliver Husain, rewarded as best German film at the Oberhausenfestival 2012.

Haal
German Premiere
Set in 1980’s Pakistan, the film explores how the military junta manipulated Islam to suit its own goals. Told from the perspective of a journalist and a classical Kathak dancer, it shows how the media and the arts were bludgeoned into submission by the dictatorship using the cudgel of religion and morality.
• Director and script: Assad Zulfiqar Khan • Pakistan, Great-Britain 2011 • 21:57 Min. • English subtitles

Item Number
Two minutes before the show. An actress is waiting for her performance. International Shortfilm Festival, Oberhausen, 2012 Award for best contribution to German competition.

Oliver Husain is a filmmaker and artist based in Toronto. Recent solo exhibitions include the Art Gallery of York University and Susan Hobbs Gallery, Toronto. In 2011 his work was included in shows at Portikus Frankfurt, ICA Philadelphia and the National Gallery of Indonesia, Jakarta. A retrospective of his films and videos was screened at Experimenta Festival, Bangalore. Oliver Husain originates from Frankfurt, Germany.
• Director and script: Oliver Husain • Canada, India, Germany 2012 • HD • 16 Min • English, Hindi

The Tigers (They’re all dead)
German Premiere
What does Mumbai do when India’s last tiger is found dead under undisclosed circumstances? The short film is a political satire on the panoramic reaction of a city that has taken too many hits to care anymore. Reiterating the Gandhian philosophy of ‚A nation is judged by the way it treats its animals‘, the short film critiques contemporary Indian society, and does so through comedy. The short film was recently awarded ‚Best Film- Upcoming Stars Panorama‘ at Jaipur International Film Festival 2012 and ‚Best Film- Student Category‘ at SCRIPT International Short Film Festival, 2012; and has been nominated at other film festivals as well.
• Director and script: Reema Sengupta • India 2011 • 14:56 Min. • Hindi with English subtitles

Time Out
German Premiere
Time Out ist a story about the coming of age of a 13 year old boy. Gaurav. He, curious about his new found attraction towards girls, idolizes his elder brother Kunal who ist he captain of the school basket ball team. Gaurav has dreams of one day being as popular as his brother. Gaurav is left confused when he finds out that his elder brother ist gay and in sexual realtionship with another boy …
• Director and book: Rikhil Bahadur • India, UK 2011 • 12:42 Min., English • Musik: Indian Ocean

Noong amadi Yeroom – Rock and Egg
German Premiere
Chaoren is really very scared. He lives in constant fear of his father who is scolding him for anything. When he had to face his father, his mind goes blank. On this fateful day Chaoren breaks his father’s Nganthak (clay smoking pipe) and he tries every possible way to replace it before his father arrives back home. Chaoren forgets his good virtues in order to avoid his father rage. He steals money from his strict father even though he is aware of the consequences Chaoren feels like a small egg facing a big hard rock .
• Script and director: Romi Meitel • India 2011 • 14 Min. • Manipuri with English subtitles

Gurpal Singh and Preet Kaur
German Premiere
This film is about an epic urban fable. Rumour has it that Gurpal Singh came to Mumbai with his wife, Preet Kaur to earn a living but died due to poverty. His ghost lives in the auto and protects his wife who helps other people. We live on the miracles of our daily life, like cell phones and aeroplanes but our psyche remains divided for that which is unseen. Have we lost our faith in Miracles?
• Lubna Yusuf • India 2011 • 8 Min. • Hindi with English subtitles